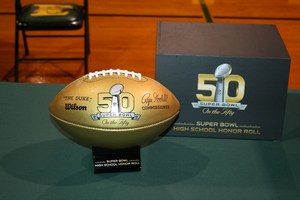 Earl Cooper, a 1976 graduate of LHS, has represented Lexington High School everywhere he has been in his life. He has never forgotten his roots and the people that supported and counseled him. When the NFL wanted to recognize the beginnings of all the Super Bowl participants, Earl took the opportunity to get more recognition for Lexington. In most cases the school honors the athlete, but in this case Cooper is honoring Lexington ISD.

Cooper played in the NFL for seven seasons after being selected with the 13th pick of the first round by San Francisco. He played in 93 games in his career. He rushed 298 times for 1124 yards. He caught 213 passes for 1908 yards with the 49ers. He held the rookie receiving record for 28 years before his record was broken.

Lexington High School is receiving a gold football with Cooper’s name and the Super Bowl games he played inscribed on the football. Each high school of every person on the active roster or coach of all 49 Super Bowls is eligible for this award. The huge undertaking is being done by the Legends Community and Wilson Sporting Goods.

Fifty years ago this month America watched as the Green Bay Packers and the Kansas City Chiefs played in the first game ever played between National Football League and American Football League teams. The World Championship Game was carried on all three major networks, ABC, NBC, and CBS. (There was no Fox network or ESPN at that time.) The game was not known as the Super Bowl until later. The annual game became a national phenomenon in just that short time. Sports fans in general had their ultimate game in professional football just like baseball and basketball.

I had a special interest in that first game, because someone I had watched play in high school, Lee Roy Caffey, was playing for the Packers. It wasn’t until later the game became much more personal because someone I had coached from the sixth grade through high school was playing. Earl Cooper, from little Lexington High School was a starter for the San Francisco 49ers.. In the first Super Bowl for him, Cooper caught the first touchdown pass ever thrown by Joe Montana. It was the first Super Bowl touchdown in 49er history. His powerful spike of the football was caught by a photographer and the picture was the cover of Sports Illustrated, a national magazine, in February of 1982.

Lexington gets a football, and of surrounding schools, only Thorndale is also eligible to be honored.